For eight bucks, we can purchase a life-changing book. Is there a better eight dollar investment? A sandwich? A drink? Sunglasses at the gas station (maybe)?  In 2016, I cut the crap and made reading habitual. Further, I downloaded the Audible app and jettisoned BS radio and my Bone Thugs N Harmony collection in favor of audiobooks and podcasts.

Shoutout to the homeboy Rory Hughes for recommending the Tim Ferriss podcast, which has been a regular source of recommendations and motivation to learn.
Without further adieu, my top five and how they’ve influenced me: 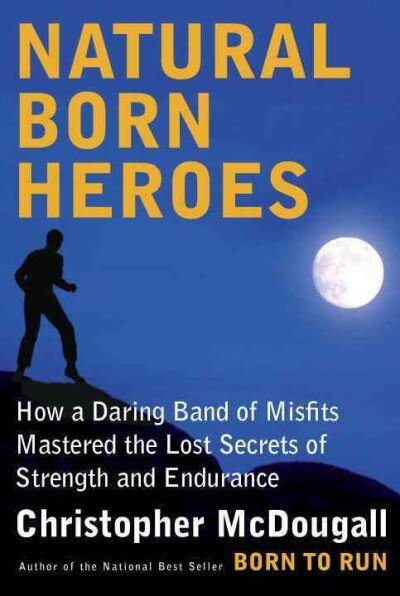 Recommended by: My dad (good dude; you’d like him)

Overview:
This author also wrote Born to Run and anyone who knew me in 2010 is aware of McDougall’s ability to persuade me.  Heroes makes a similar claim: Our bodies are capable of far more than we understand, and we can get the most out of them by acting according to evolutionary principles.

Standout Excerpt:
“Humans are superb endurance athletes who’ve roamed farther across the planet than any other species, and we didn’t do it on Gatorade and bagels…You want to burn more fat and less sugar. As it stands now, your body is a sugar-burning, fat-storing monstrosity.”

Impact on Me:
This book passed the “stare off into space and nod” test for me (I’ll come up with a better name as we go). I read this book on a beach, and would gaze and the ocean while mumbling, “dammit, he’s right” after several passages. The result? I’ve stopped eating sugar and carbs (with a few exceptions), have loaded up on leafy greens and healthy fats, have lost 20 pounds, and find myself being less of a jerk.
Not bad! How is this one only #5?

Overview:
Although we’ve yet to meet, Tim has had quite an impact on me. This book is a collection of habits and “life hacks” pulled from his 200+ interviews with elite performers, and includes responses to questions such as “what does the first hour of your day look like?” “What have you changed your mind about in the last few years? Why?” and “What is the book (or books) you’ve given most as a gift?”
Great questions beget great answers.

Standout Excerpt:
“Meditation is a ‘meta-skill’ that improves everything else. You’re starting your day by practicing focus when it doesn’t matter (sitting on a couch for 10 minutes) so that you can focus better later when it does matter (negotiations, conversation with a loved one, etc.)  If you want better results with less stress, fewer “I should have said X” mental loops, etc., meditations acts as a warm bath for the mind. Meditation allows me to step back and gain a “witness perspective” so that I’m observing my thoughts instead of being tumbled by them.”

Impact on Me:
A staggering 80% of those interviewed have some form of daily meditation or mindfulness practice. After learning this, I’ve used Headspace (smartphone app), to guide me through 10 minute meditations each morning. Now 35 days into it, I am a believer.

Recommended by: My friends Bill Gray and Dan Wielechowski. Also several guests on the Ferriss podcast, and my #1 on this list frequently pulls quotes from Marcus Aurelius.

Overview: Before reading this, I knew Marcus as the old guy in the movie Gladiator (not Russell Crowe or Joquain Phoenix, who play Maximus and Commodus, respectively). Little did I know, his Meditations, which he wrote only for himself while he was Roman Emperor (and thus the most powerful man in the world) some 2,000 years ago, is considered a “must-read” by contemporary leaders such as Bill Clinton and Steve Forbes. Further, my new favorite author Ryan Holiday has read Meditations 100 times over the past 10 years.

Standout Excerpts (written between 170 and 180 AD, mind you):
“Begin the morning by saying to yourself, I shall meet with the busybody, the ungrateful, arrogant, deceitful, envious, unsocial. All these things happen to them by reason of their ignorance of what is good and evil…I can neither be injured by any of them…nor can I be angry with my kinsman, nor hate him. For we are made for cooperation…To act against one another is contrary to nature.”

Impact on Me: It’s comforting to know the most powerful man at the height of the Roman Empire was dealing with many of the same challenges we deal with today. He writes to himself about struggling to get out of a warm bed on a cold morning, avoiding distractions, and making decisions for the common good. Meditations has now replaced social media and other nonsense as my “bathroom reading”.

Overview: Yuval Noah Harari, a professor of history in Israel, offers up a mind-blowing and orthogonal (meaning it doesn’t align with your normal way of thinking) view of our species. Harari takes the perspective of an anthropologist, studying Homo Sapiens like we’re just another animal on this planet (because really, we are). So what’s different about this animal? How has this animal evolved to go to the moon, send SnapChats, and worry about the future when no other animal can do so?
Harari comes to some pretty startling conclusions, such as the idea that we’re the only animals able to create fiction and myths. As story-telling monkeys, we’ve been able to organize by the millions based on belief in nations, religions, corporations, money–all of which are created in the imaginations of Homo Sapiens and no other animal can understand.

Standout Excerpt:
(On why we gorge on junk food)
“A typical forager 30,000 years ago had access to only one type of sweet food – ripe fruit. If a stone age woman came across a tree groaning with figs, the most sensible thing to do was eat as many as possible on the spot, before the local baboon band picked the tree bare. This instinct to gorge was hard-wired into our genes. Today, we may be living in high-rise apartments with over-stuffed refrigerators, but our DNA still thinks we’re in the savannah. That’s what makes some of us spoon down an entire tub of Ben & Jerry’s when we find one in the freezer and wash it down with a jumbo Coke. This ‘gorging gene’ theory is widely accepted.”

Impact on Me:
I’m only beginning to realize the impact of this one, and as I write about it I’m realizing I need to revisit it. The quote above forced me to realize my body is that of a hunter-gatherer, and proper treatment of it is to eat and exercise like my foraging ancestors. In other words, eat what exists in nature and make time to run, climb and lift each day.
There is so much more to this one.

Recommended By: I kinda discovered this one on my own. Obstacle was published in 2014, while Ryan Holiday’s more recent book (which was on the top 5 borderline), Ego is the Enemy, came out this past June (2016). Tim Ferriss released an audio chapter of Ego this past summer, and I was hooked. After listening to Ego on Audible, I researched the author and discovered that the 2014 New England Patriots players and coaches read Obstacle and used it as a team mantra. What’s good enough for Brady and Belichick is good enough for your boy SG.

Overview: Pulling from the minds of ancient Stoic philosophers (Marcus Aurelius, Epictetus, Seneca) and weaving their teachings into the stories of people you may have heard of (Amelia Earhart, Rubin “Hurricane” Carter, Nick Saban, Ulysses S. Grant), Ryan Holiday shows us how to flip our obstacles into opportunities.
The book is divided into three sections: Perception, Action, and Will:
First, see clearly. Next, act correctly, finally, endure and accept the world as it is.

Standout Excerpt (my lord, there are so many):
“Whatever we face, we have a choice: Will we be blocked by obstacles, or will we advance through and over them?”
“The phrase ‘this happened and it is bad’ is actually two impressions. The first–‘this happened’–is objective. The second–‘it is bad’–is subjective…There is no good or bad without us. There is only perception. There is the event itself and the story we tell ourselves about what it means. That’s a thought that changes everything, doesn’t it?”
“Focusing exclusively on what is in our power magnifies and enhances our power. But every ounce of energy directed at things we can’t actually influence is wasted–self indulgent and self destructive.”
“A good person dyes events with his own color, and turns whatever happens to his own benefit.”

Impact on me:
Those who know me well might be rolling their eyes right now, as I haven’t shut up about this book–and I don’t plan to. This was the first book to achieve triple crown status for me (meaning I own it on Kindle, Audible, and in print–although I keep giving my print versions away). I’ve gifted this book over 30 times since reading it in September, and it has become a way of life.
Here’s a quick story of how I put it into practice:
Shortly after purchasing a new car, I returned to it in a parking garage to find some lady had sideswiped it while backing out of the space next to me, and left some deep scratches. Instead of choosing anger (which wouldn’t help anything), I called the woman and thanked her for doing the right thing and leaving a note for me. Now she’s advising me on public relations for my nonprofits and helping me to perform a TED Talk. Thanks, Ryan Holiday!

So there’s my top five for 2016. A few honorable mentions that just barely missed the cut:
Tribe by Sebastian Junger
Ego is the Enemy by Ryan Holiday
The 4-Hour Workweek by Tim Ferriss
The Daily Stoic by Ryan Holiday
The Subtle Art of Not Giving a F*ck by Mark Manson
A Short History of Nearly Everything by Bill Bryson

What’s on tap for 2017, you ask? Already in progress are:
Atlas Shrugged by Ayn Rand
How to Win Friends and Influence People by Dale Carnegie

Thanks for reading. Blogging will be a regular thing for me in 2017…more to come!

This is a text widget. The Text Widget allows you to add text or HTML to your sidebar. You can use a text widget to display text, links, images, HTML, or a combination of these. Edit them in the Widget section of the Customizer.
%d bloggers like this: